Weddings are very traditional events and almost everyone sticks to a similar format, even if they have no idea where most of the traditions come from in the first place. A lot of people are not that bothered about some of these traditions but they do them anyway because that’s what happens at weddings. But you have to remember that you’re paying for all this and weddings don’t come cheap. That means you’re probably wasting a lot of money on things that you don’t even want on your wedding day, and this could lead to you not getting the complete and personal experience that you want. That’s why you should think about skipping some of the traditions that you don’t like so you can make things only as expensive as they should be. Here are some of the wedding traditions that many couples are moving away from to save money on their big day.

A lot of people want a white wedding dress and that’s fine. But if you don’t really like the idea, don’t think that you have to wear white. There are plenty of amazing dresses that aren’t white, and if you buy a dress from somewhere other than a bridal shop, it will be so much cheaper. As soon as you attach the word wedding to something, the price instantly doubles, so if you don’t care about wearing white, you should consider buying a dress from elsewhere. It’s becoming a lot more common for people to do this because it’s a simple way to personalize your wedding and make it feel more unique to you and your partner.

Check out our Ideas for a Fairy Wedding.

When it comes to wedding bands, gold has always been the standard material. But a lot of people (especially grooms), don’t really like gold rings because it doesn’t fit with their personal style. They wouldn’t wear gold in their normal life, so why be compelled to choose it for the rest of your life? You can easily find an affordable mens wedding ring from tungsten, rose gold, or even silicon. They look way more interesting than your standard gold wedding band and they’re much less expensive  as well, so it’s often the best choice.

The wedding cake is often the cost that surprises people the most when they start planning their big day. You’ll probably be shocked at just how much a cake can cost, and a lot of people don’t feel the need to have a piece anyway, so it’s possible that hardly any of it will get eaten. It’s a waste of money to pay over the odds for a huge 3 tiered cake if that isn’t what you want, which is why it’s becoming very common for people to come up with their own alternatives. Having elegantly simple cupcakes is a very common trend at the minute and it’s great because they’re more easily accessible, they don’t require a plate and fork, and you aren’t left with a mountain of uneaten cake at the end of your special  night.

Wedding gift lists are usually filled with home and kitchen items because most couples never lived together until they were married, so they needed all of that stuff. But times have moved on and the majority of people have already lived together for a while before they decide to get married. Unfortunately, the wedding list hasn’t really moved on so most married couples end up with a lot of gifts that they don’t really need and a house that has two of everything. That’s why it’s best to do away with the list and maybe even the idea of presents entirely. Instead, a lot of people ask for money to put towards their honeymoon or something towards a deposit on a house. It’s much more useful than having loads of kitchen utensils that you don’t need.

Nobody wants to skip the honeymoon, but who says you have to do it straight after the wedding? You’ve already spent a lot of money on the wedding itself which means that you might not be able to afford your dream honeymoon. You could always compromise and just go somewhere more affordable right after the wedding, but it’s a real shame if you can’t go to your dream destination on your honeymoon. It’s not uncommon now for newly married couples to wait a year or so and save up some more money. You get longer to plan the perfect honeymoon and it’s a lot easier to manage the financial side of it as well.

If you follow every single wedding tradition, you don’t have that much control over your big day and you will end up wasting a lot of money on things that you might not even want. But if you get rid of the traditions that you don’t like, you can save money and have a much more gratifying and personal wedding. Happy planning! 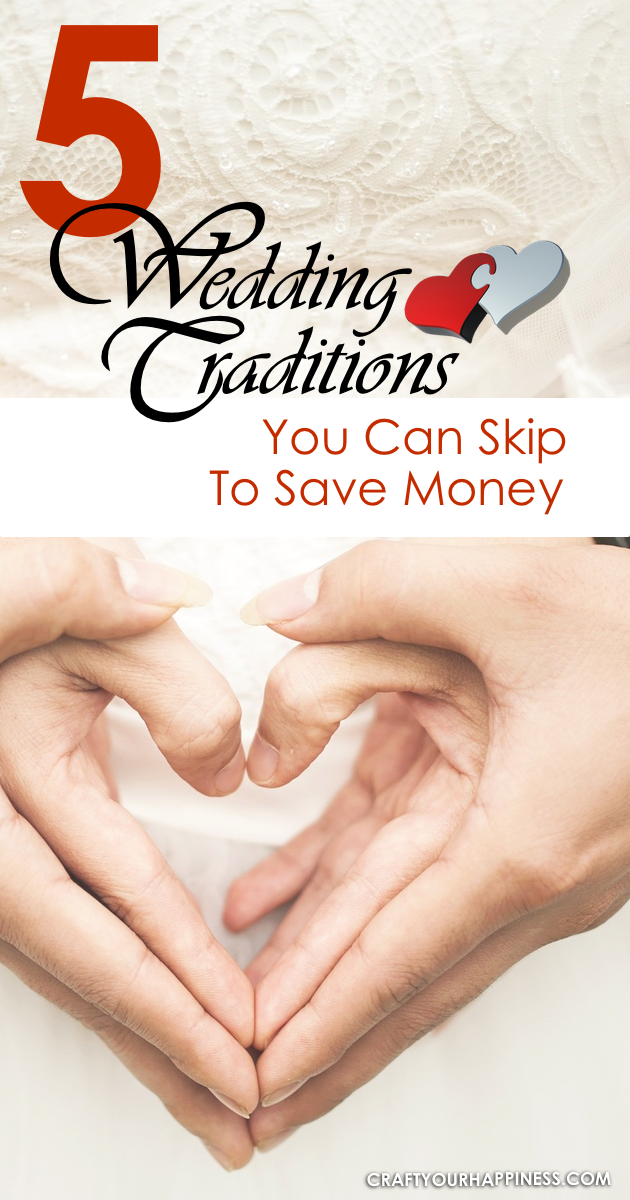 Previous: Natural Remedies for Insomnia
Next: How to Have a Healthy Home Environment