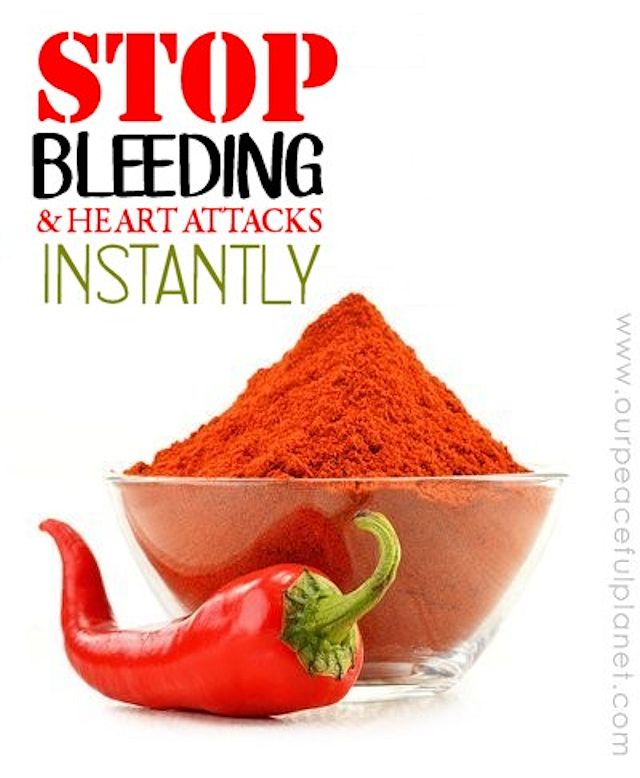 Cayenne is one of those dramatic herbs. It can save a life instantly in an emergency. Like most herbs it also  treats a variety of things from wounds to ulcers and is incredibly beneficial as a preventive to take regularly.  I carry Cayenne Tincture in my purse at ALL times for two reasons. 1. It will stop bleeding instantly and 2. It will stop a heart attack or stroke instantly.  I’ve not had the opportunity to use it personally for the latter but I’ve used it several times for bleeding, 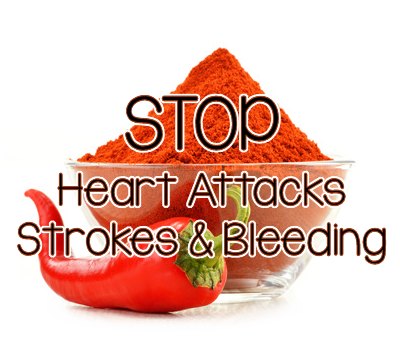 including a recent deep cut and I was able to catch it on video.  I was home alone at the time so I was trying to handle the camera while dealing with a wound at the same time. Though  not the best quality of video it clearly shows how great it works to stop bleeding.

Roy and I are firm believers in natural and herbal treatments. I’ve studied them for years now. They cause no harmful side effects and truly heal disease rather than just mask symptoms. They’ve saved our lives more than once.  You can also use 1 tsp powdered cayenne in a cup of hot water drunk quickly to stop a heart attack or bleeding. The tincture is just easier to use and less hot.

NOTE: For heart attacks and bleeding ONLY USE LIQUID FORM as a tea or tincture.  NEVER use capsules for that. Cayenne starts its work in the mouth. This is very important. Like I said I carry the tincture with me wherever I go.

**IMPORTANT**
The only time cayenne will NOT stop bleeding is if you have a blood disorder where your blood does not clot properly.

If you want to read more about the amazing benefits of cayene check out our post  Cayenne, Vinegar & Honey : A Daily Dose Of Health

Video of Cayenne Stopping My Bleeding

Here is the video I took when I cut my finger recently. I was doing a craft with an X-acto knife and my hand slipped and the point of the knife when straight into my thumb. It was not a wide cut but it went deep. I’m pretty sure it hit bone. I grabbed a paper towel and then my video camera. I was home alone at the time so  I had to keep laying the camera down to treat the wound.  I’ve clipped and edited the 5 minute so it just shows the initial wound and then the cayenne stopping the bleeding.   If you’ve ever had a cut on your hand you are likely aware that these bleed forever. It will bleed through a bandage every few minutes for an hour or more. Hand wounds, like head wounds, are  like that. With the cayenne it stopped bleeding in 90 seconds and it never started again.

Dr. Christopher was a Master Herbalist and Naturopathic Doctor. I’ve used his information on herbs for years. He was well known in the United States and even abroad for his teachings and knowledge and incredible influence as one of the largest promoters of natural healing.  This is what he states about cayenne:             1. HEART ATTACKS: In 35 years of practice, and working with the people and teaching, I have never on house calls lost one heart attack patient and the reason is, whenever I go in–if they are still breathing–I pour down them a cup of cayenne tea (a teaspoon of cayenne in a cup of hot water, and within minutes they are up and around). This is one of the fastest acting aids we could ever give for the heart, because it feeds that heart immediately. Most hearts are suffering from malnutrition because of processed food we are eating, but here it gets a good powerful dose of real food and it’s something that has brought people in time after time. This is something that everyone should know how great it is, because a heart attack can come to your friends or loved ones any time. And even yourself. The warm tea is faster working than tablets, capsules, cold tea, because the warm tea opens up the cell structure–makes it expand and accept the cayenne that much faster, and it goes directly to the heart, through the artery system, and feeds it in powerful food. [Dr. Christopher¹s Newsletter 1-12]             1. STOP BLEEDING: A wound, external or internal, will stop bleeding if the individual will drink a cup of water (preferably hot) with a teaspoon of cayenne pepper (red pepper) stirred into it. The bleeding will stop generally by the time a person can count up to ten after drinking the cayenne tea. The cayenne equalizes the blood pressure from the top of the head to the feet. This keeps the pressure from the hemorrhage area so it will clot naturally, which it cannot do with heavy blood pressure pumping the blood rapidly at the hemorrhage area. [Herbal Home Health Care p.61]   Note: Does MANY other things including lowering blood pressure and healing ulcers.

The 90 HU Cayenne  is a VERY VERY HOT medicinal type. This is what I use but be careful with it.  You can use regular cayenne from your cupboard in a cup of hot water. If you use the higher heat version you may want to test a little ahead of time to see how you tolerate it.  You can also buy cayenne extract.