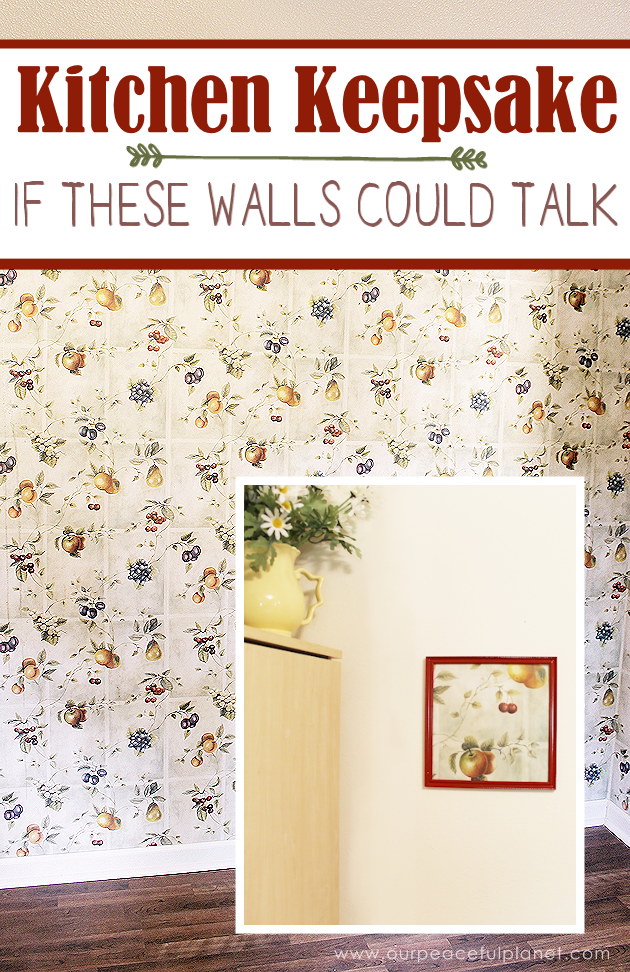 I’m a keepsake person. Not to be confused with a hoarder, mind you. I’ve saved things from my own childhood and my children’s childhood through the years. I don’t keep every little scrap of paper they ever brought home. Only the best and most special things are kept and then filed away by year in a large plastic tub. My kids are all grown now and one of their greatest pleasures is going through those tubs. I even saved recordings of them talking when they were little. And I’ve done a post on How to Make a Keepsake Dog or Puppy Paw Print. Even with all I’ve saved, there are some things I wish I’d kept. Like the key for every house we ever lived in. I’ve seen people do awesome displays with those but that just never even crossed my mind.

My daughter did something for me recently that was such a unique idea I wanted to share it in case others might want to do it at some point in the future. As part of our kitchen transformation, she removed wallpaper that had been in the home I’m pretty sure since the 70’s. We’re talking retro-city. Wall to wall fruit and berries and such. She did all the work herself and stripped it off and painted the kitchen a lovely eggshell. What I didn’t know until the next day was that she had taken a swatch of the old wallpaper and framed it for me and hung it in the kitchen as a reminder. It almost brought a tear to my eye. So I wanted to share that little tidbit in case any of you have the same opportunity in the future and might want to do the same thing.  Eventually the swatch will go in our family keepsake box but for now it will hang on our wall for several years at least, a reminder of years past.

Previous: The Beginning of an Amazing Outdated Kitchen Transformation
Next: Make a Country Kitchen Chicken Wire Frame Memo Board with Faux Succulents