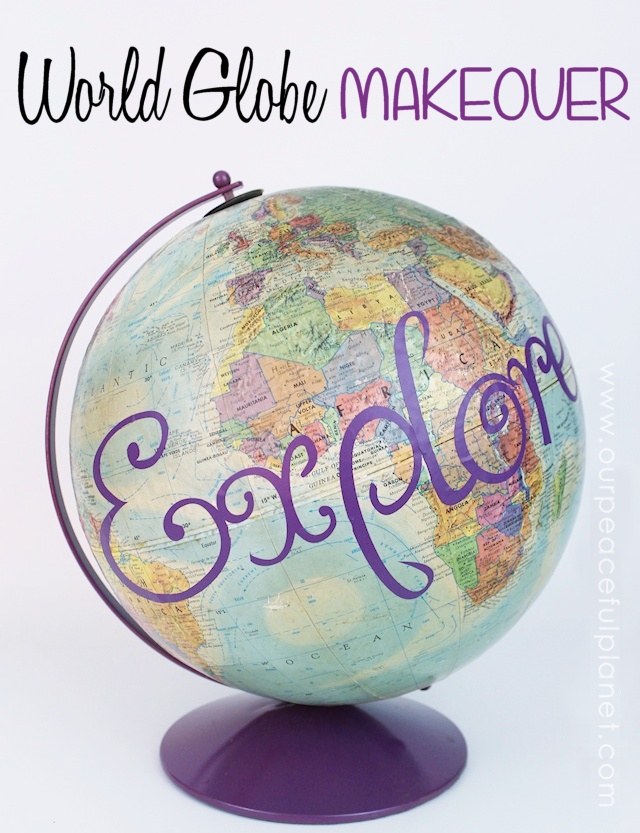 I love globes and I’ve seen some of the awesome makeovers people have done with old ones. So I hit eBay looking for one I could purchase and re-do. Ends up even used ones in poor shape were pretty pricey. But I kept checking and eventually found one that I was able to snag fairly reasonably. My plan was to do a full makeover,  painting over the globe and adding letters. However, when I received it I realized the globe itself, though old, was in really good shape. I couldn’t bring myself to paint over it. So my major makeover turned into a minor one. But I’m very happy with the result and changes I made while maintaining the integrity of the actual globe itself.

If you’re a skilled painter (I’m not) you could paint on the words. You could also print and cut them out of regular paper and glue them on. I used my Silhouette Portrait to print the letters on self-sticking vinyl.  I LOVE that little machine! I’ve included the Silhouette file I used for those who own that machine plus a plain text version of my letters for those who want to cut out the letters by hand.

You can of course use any word you wish on your globe. However, if you’d like to use the same one that I did you can download the text for the word “Explore” below as a pdf that you can cut out. For those who might have a Silhouette machine there is also a file for that!  My text fits a 12″ globe. 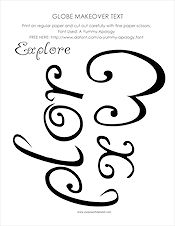 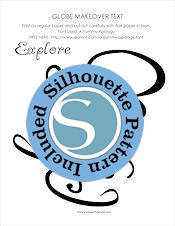 The first thing I did was to take apart the globe. The top disc had the north, south, east and west direction markers listed on it but it was too rusted to restore so I painted over it.  Though the globe was a bit yellowed it was in wonderful shape with no tears on the surface. This is why I decided to clean it up and keep it as is. 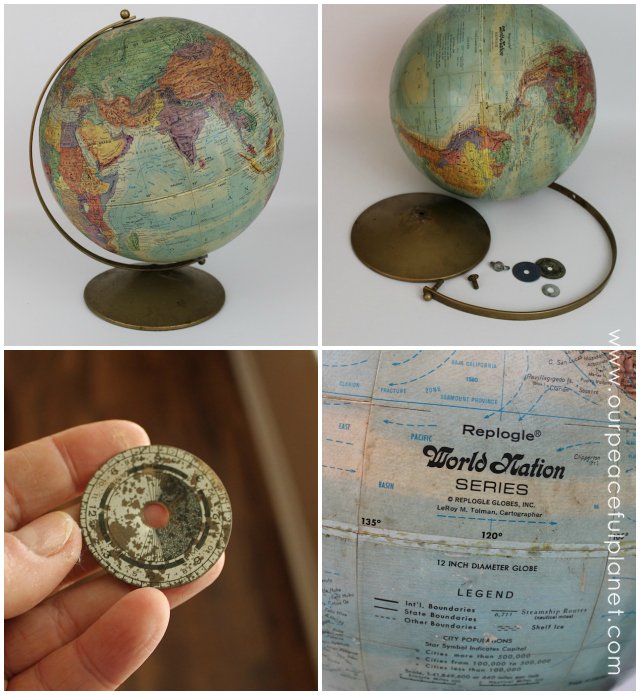 The metal base was rusted in places. I sanded some of the rougher spots with a sanding sponge then cleaned it up. There was also a dent in the base which I hammered out. It wasn’t perfect but because of the location it wouldn’t  show anyway.  I then painted all the metal parts. I suggest using Rust-Oleum or something similar. l chose a color that was pulled from some of the contents on the map. 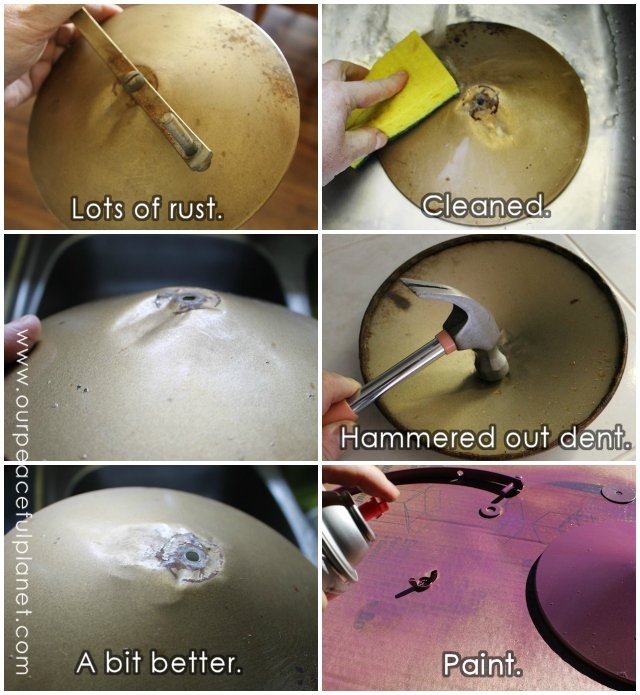 I wiped off the globe with a damp paper towel. I thought about coating it first in Mod Podge to help protect it but with it being yellowed I wanted the option to try and figure out how to brighten it up later. Because I was using removable vinyl I could do this.  I cut out my word  of choice “Explore” on my silhouette printer on some vinyl that matched my color choice. If you’ve cut out your letters by hand you would glue them on at this point. Stick glue or spray adhesive would work great for this. 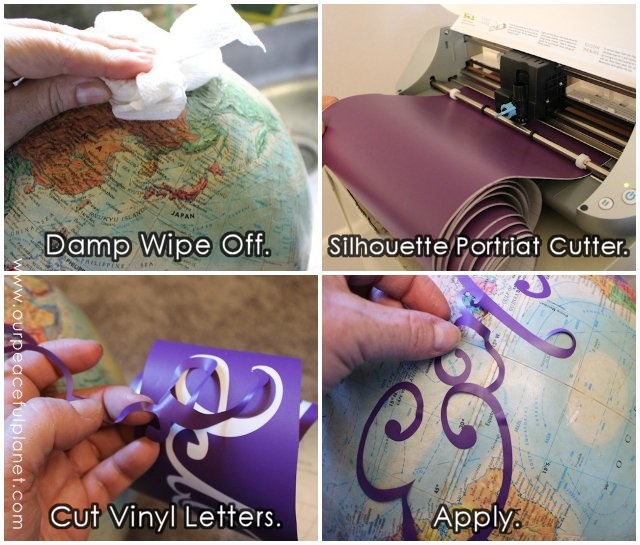 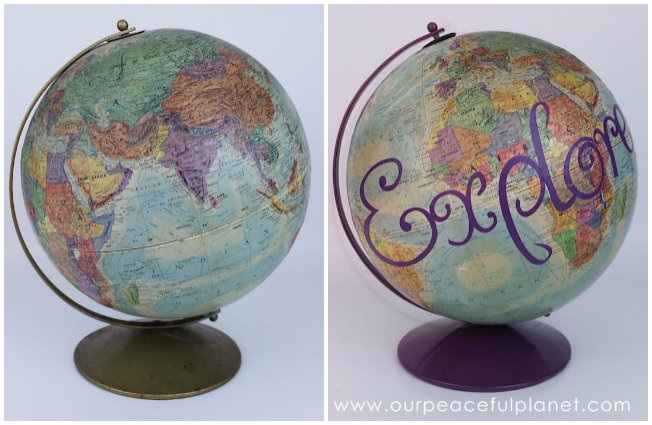 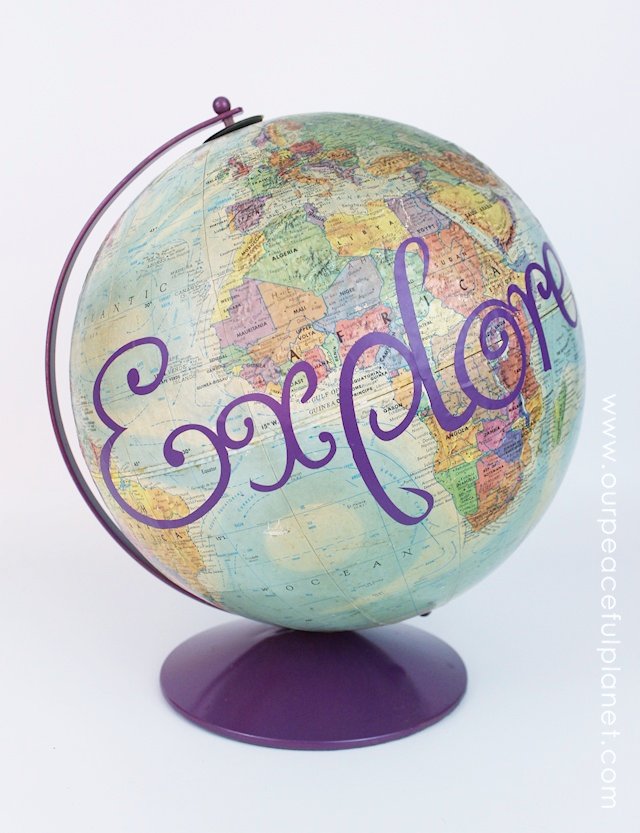