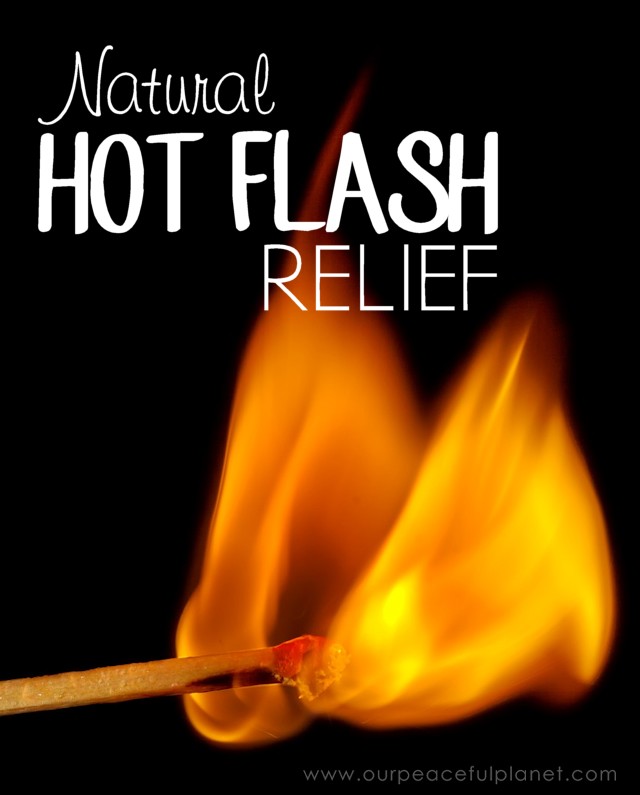 ” If you’re a mid-life gal there’s a 70% chance you’ve experienced or will experience these.”

Hot flashes suck. I tried to explain them to Roy but it’s difficult. They are much more than just feeling warm all over. Severe ones make you literally not want to even be touched. You can become instantly drenched and clammy all over. It’s a horrible feeling along with incredible discomfort. If you’re a mid-life gal there’s a 70% chance you’ve experienced or will experience these. I was hoping to be in the 30% who didn’t, but alas twas not to be. I have found a way to alleviate them for the most part and wanted to share what works for me.

Products That Can Work Wonders! 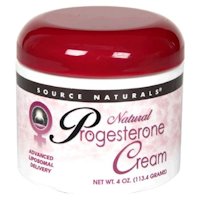 When they first started having hot flashes I used a yam cream which got rid of them completely. (There are a variety of brands and I’ve used several with success.)  That lasted for almost a year. Then they got a little worse and I added an additional supplement into the mix. (A high end Black Cohosh one.) This reduced them 95% and the ones I had

were very low in intensity. I was cool with that. (No pun intended).  One or both of these help many and they never need anything else.

Humidity Did Me In

I currently live in the south where the humidity is through the roof. Once that humidity kicked in my hot flashes came back with a vengeance. And they were exponentially worse. I’m talking all day all night long soaked in sweat feeling like your going crazy worse. I added even more supplements and increased what I had been taking. It didn’t touch them. I started to get a little panicky. This was life altering nastiness.

Finally it was making my life so horrible I did something I seldom do. I went to the doctor to see about some meds to help at least for the duration of the summer. I use natural and herbal supplements when I need to heal anything and avoid pharmaceutical like the plague as I’ve yet to see any that don’t have a whole list of side effects worse than what they propose to help. But I was desperate. My doctor gave me some standard hormone pills for the situation. I came home, pulled out the sheet that goes with the drugs and read it. The first thing it said was that they could give me cancer. Then it went on to other horrible diseases and side effects I could get if I took them. Aside from being highly disturbed that I go to a doctor for help and I get given stuff that can kill me, I decided come hell or high water I’d find another way. I’d worked for years to be careful what I put into my body to keep it healthy. I wasn’t about to put this toxic stuff into it if I could avoid it.

Paper That Came With My Meds 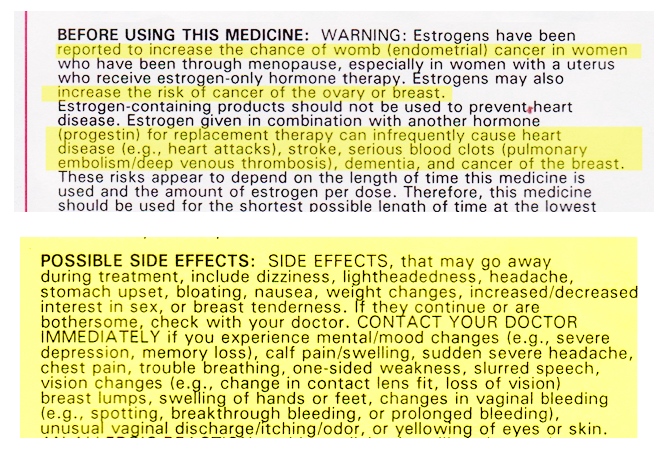 The Answer to My Final Hot Flash Problem: A Dehumidifier!

This event inspired me to hunker down and do more research. One thing that came up was home dehumidifiers. Humidly was the problem at this point so I decided to check into them. I honestly expected that to be a futile, thinking they would not only be off the charts expensive but also have to be built into the home itself to work. We are in a rental home so that was not an option. Ends up I was wrong. A quick search on Amazon pulled up several, one of which had great reviews. I was unsure how they worked though and the area they would cover. It was a Frigidaire unit and according to some of the reviews I read it would help the humidity in the whole house. I doubted how much humidity this small until would actually remove. It was only $229 which didn’t seem like much to do what I needed done but being desperate I purchased it. Amazon no longer carries the Frigidaire model I bought but they have quite a few others here.

It was delivered two days later with my Amazon Prime. Roy opened it up and basically plugged it in and turned it on. Within two hours I felt a difference in the house and my hot flashes went way down. It was literally that quick. I was blown away. That night I had my first comfortable sleep in weeks. I’m still taking my supplements as I’m pretty sure I’d have the full blown hot flashes without them but I’m having them removed about 85% and the ones I have are fairly minor.

I would have rather found a supplement that helped during the summer. After all if I go outside I’m going to get them again but I don’t do much running around so this works for now and it’s saved my sanity and my health. This unit requires being emptied once or twice a day or you can hook up a hose and have it run into a sink without the emptying part. We’re doing ours manually and we have to empty it once about ever 8 hours. It’s less often depending on the level of humidity. (It shuts off the fan when it needs emptied.) It appears to hold about 3 gallons. So three gallons of water was pulled out of our air in 8 hours. Wow.

I’m a huge fan of fans. (pun intended). I just love wind, always have. I own all sizes from 4″ ones to over 27″ square floor models. I have a fan at my desk and one by my bed and sleep with it year round. In summer the large ones come out and are in every room as they help with the heat and humidity. I also have a battery operated one in case the power goes out. Best to be prepared I always say. I ran through the house and took a few snapshots of some of my fans. 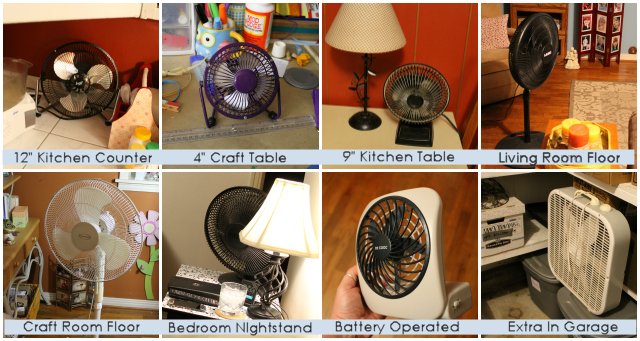 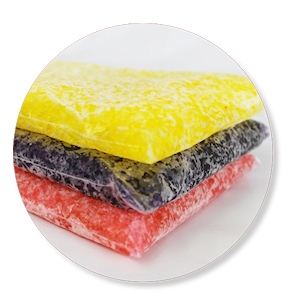 This is from a past post but they are so easy and beautiful to make and are incredibly pliable and super cold. They are great to stick on the back of your neck during a hot flash and of course are wonderful for muscle sprains or even keeping food cold in a lunch bag!

We placed the unit in our hallway. It has to be one foot away from the walls. Doors to all rooms must be open to keep them dry. 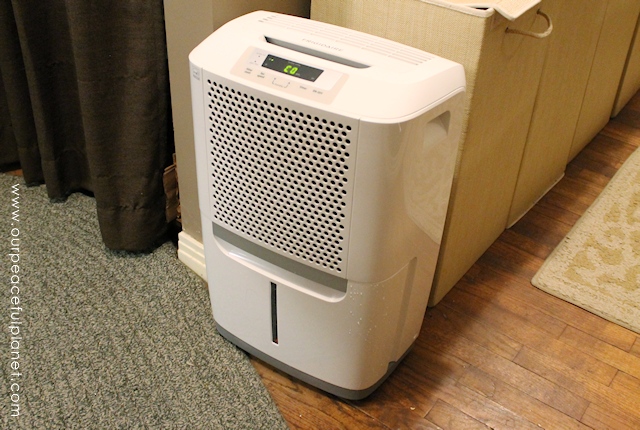 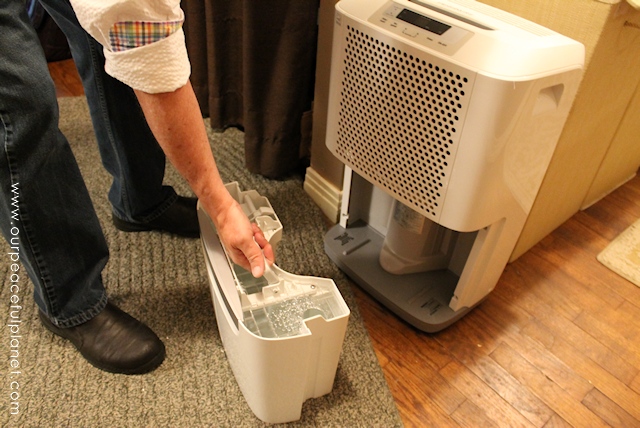 It shuts off when full. If you don’t want to empty it manually you have the option of attaching a hose to run into a sink on an ongoing basis. 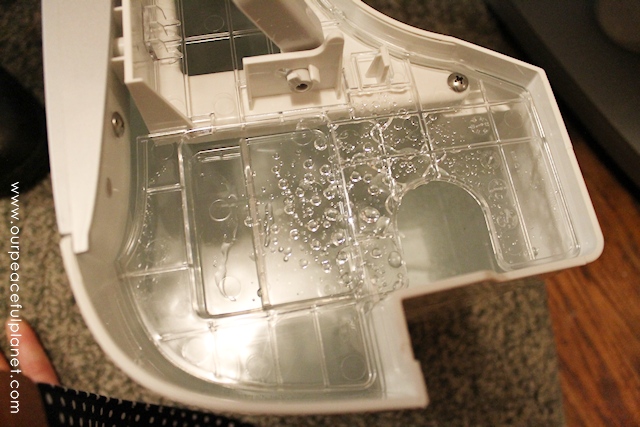 Water it pulled out of the air in 8 hours. 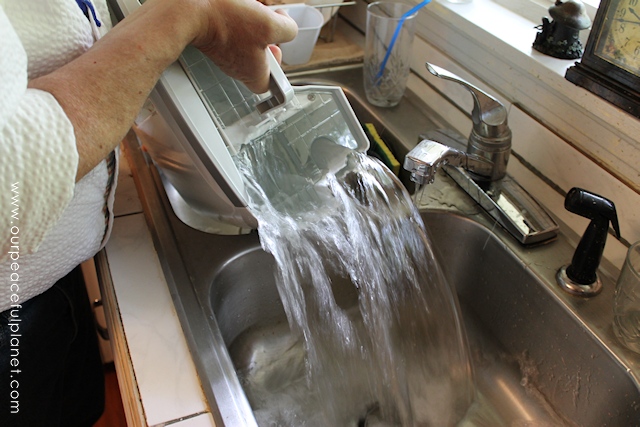 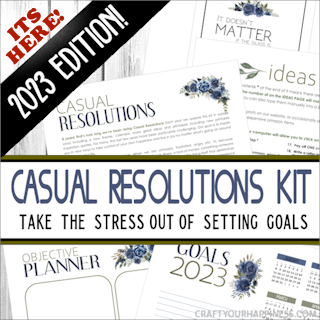